This Thrive Leads review is very bittersweet for to write.

This review is not going to be a singular get it or don’t. I’ll lay out the main pros and cons Thrive Leads has and help you decide whether to get it or not. So let’s begin: 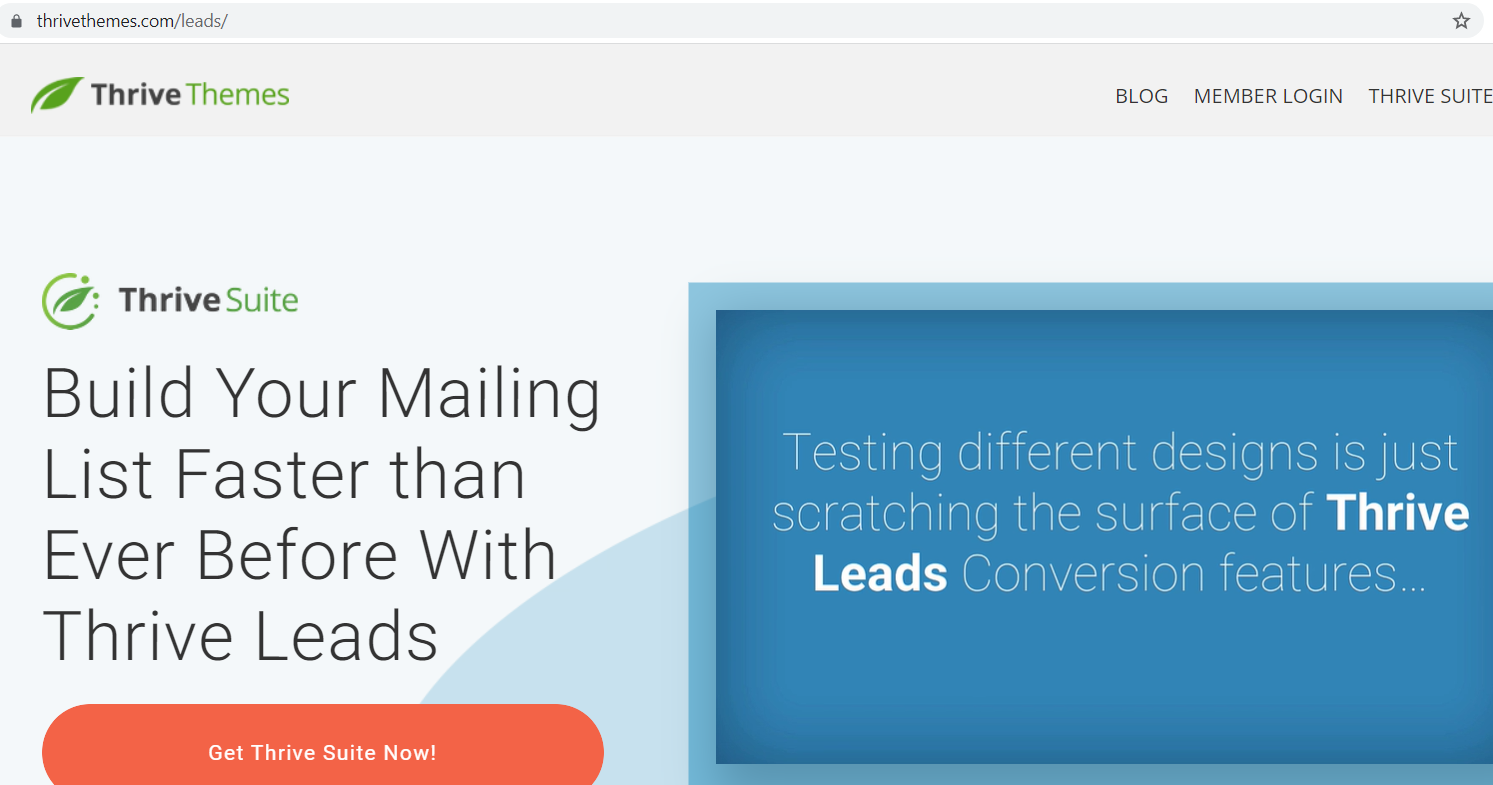 This review will help you understand if this plugin is right for you (or not).

What is Thrive Leads?

It’s a WordPress plugin you install that allows you to make various types of web forms on your website, and in my case: Exit pop ups.

Yes absolutely. It can be used for various purposes:

What is Thrive Themes?

Right now people can get the whole Thrive Suite for one low price, which includes Thrive Leads as part of it. Back when I first got this plugin, I had to get it separately, so the deal is much better today.

My history with Thrive Leads part I (why I even got it):

I’ve been using Thrive Leads for several years now. Basically, I wanted to get Thrive Leads to boost my affiliate sales, at the time on 1 specific website.

The whole selling point behind it was that most people who visit your website (or any other) will leave and an exit pop up will help keep certain portions of that exiting traffic on it.

And that presents a last ditch opportunity to convince those leaving to buy whatever you’re offering and even though that sounds desperate, trust me, it works (I would know).

My honeymoon stage with Thrive Leads (mass sales and success).

While there was some initial learning curve to setting it up, I made my first successful exit pop up pages and set it up on the 1 site I mentioned earlier. It was already getting 100’s of visitors on a daily basis, and adding this new layer of an online sales funnel wouldn’t change anything that was already working, it would just add another layer on top of the existing one.

In fact, here is how my 2 main exit pop ups worked:

Upon installing it, within 24 hours, my sales climbed double digits. In fact, my exit pop up on the affiliate review page was converting at 10% in sales. Those extra sales would NOT be in existence if I didn’t have Thrive Leads installed.

I would continue using Thrive Leads for years after that, and would split test numerous others, with great success in many cases.

It’s not out of the realm of possibilities that using Thrive Leads may have added an extra $50,000 in affiliate sales for me.

Let me just say that the same warnings I’m about to give you regarding Thrive Leads existed several years ago and here they are:

As good and legit as this plugin is, there is one giant elephant in the room you can’t escape: This plugin puts a massive strain on your site speeds, and that can have a negative ripple effect on 2 things:

In fact, I’d been told this for years and had been getting suggestions to either remove this plugin or try an alternative one because of those 2 issues I just pointed out by people I trust highly in the SEO world (the owners of Wealthy Affiliate), including my affiliate coach.

How much can Thrive Leads hinder your site speeds? Well here’s a quick analysis:

For desktop, they were always high to begin with. This type of immense rise in speeds can have a DRAMATIC impact on rankings (faster speeds = better rankings = more traffic).

And by the way, while that test screenshot above was for one page, the page speeds improved across the ENTIRE site just so we’re clear. That particular site has over 900 posts of content, and having ALL 900+ of them rise drastically in mobile speeds can have a massively positive impact on rankings (as I assume it will).

Now to be fair, could there be something other than Thrive Leads slowing down my site? Sure:

I’ve done various tests myself and through the help of people who know website speeds better than I do, there indeed have been certain changes I made across my sites which did raise speeds. Here’s just some things I did:

This all HELPED, but even combined together, the benefits of these 4 things paled in comparison to doing a simple OFF switch on Thrive Leads. So in short, Thrive Leads was the main reason I had slower site speeds on mobile.

Never the less, despite these facts, I remained stubborn:

I didn’t see it necessary to change what was already working. I had decent rankings, good sales and Thrive Leads WAS adding to it. Why switch things up now? And so I stayed on my path for another few years.

The moment I decided to risk getting rid of Thrive Leads (and what made me do it):

In 2021, there had been several major Google updates:

This particular site was hit pretty bad by the first Google core update, and remained pretty plateaued with the next 2.

At the same time, I had been growing my site’s content, getting rankings and it was and still is growing, but no matter what I’ve been doing so far, it always seemed like there had been a major “ceiling” on my SEO traffic success.

I decided to do some deep dive with the same trusted people I had been coming to for advice for years, and once again, the same suggestion was made: Deactivate Thrive Leads.

The hypothesis was (and still is) that it’s speed lowering functions are messing up my SEO rankings, and in some cases, the mass exit pop ups across the site are annoying my users. Thus this is impacting my organic rankings.

And by the way, this suggestion by my friends wasn’t based just on my 1 site here, but numerous ones playing out the same way. Thrive Leads was often the “culprit” behind many slower website performances and they had noticed time and time again how page speeds (especially for mobile) being faster positively affected SEO performance and rankings.

By getting rid of it, I can solve those 2 problems. But of course, I risk losing my existing sales this plugin had been giving me. So do I do it?

Well my emotions said no, but my logic said yes, because if I had been doing so much for long and getting no new results, it was time for a major change, and at times, it’s important to listen to people who know more than you on this subject, so the sacrifice had to be made.

Basically, this is what I figured I’d have to gain deactivating Thrive Leads: 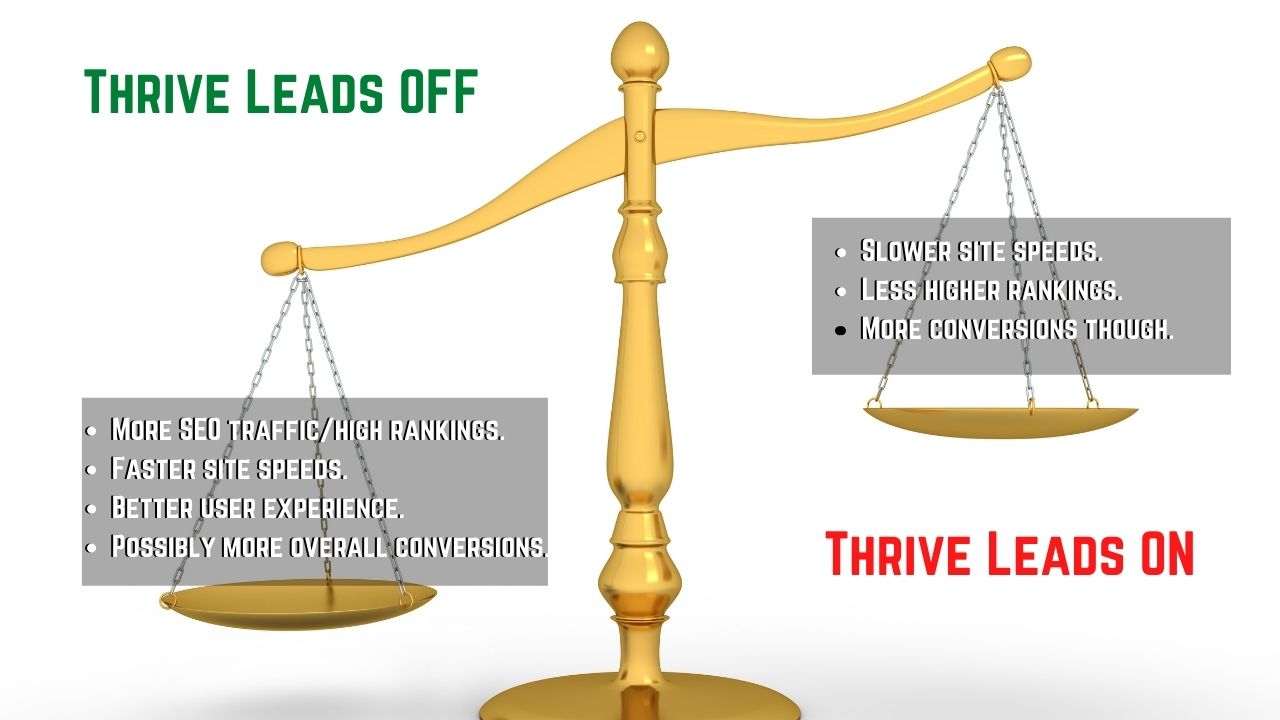 And thus Thrive Leads was deactivated for this site, and will stay that way for about a month. If the rankings rise, I’ll know it was because of this move. If they don’t, I’ll hypothesize, possibly reactivate it, or try something else.

Either way, this is a worthwhile experiment. With all the work I’d been putting in already, I would rather take a break and see how things progress from this 1 simple change.

Ultimately, Thrive Leads works, but to achieve the best case scenario with it, you’ll need to sacrifice something (Site speeds mainly), and if you’re prepared to do that, then this program is for you and if not, you’re better off without it.

For me and this particular site, I decided to deactivate Thrive Leads. Here’s why:

Is Thrive Leads for you? Here’s what you need to know:

My “bottom line” to this question is this:

Again, if you’re seeking to get good SEO results, this plugin won’t help with site speeds, a pivotal part of the process, so that’s a major con.

If you’re serious about SEO, I would not consider this plugin to be part of your plugin base. Have good hosting (Wealthy Affiliate offers this), make great content and you should be fine.

And if you mix up your affiliate projects or online business sales funnels (in other words, you do more than SEO), then yes, Thrive Leads can serve you well, provided you know what you’re doing.

Overall, I’m not fully getting rid of it. For my 1 page websites, it still has MASSIVE purposes and I’m eternally grateful for the extra money it’s helped me make. But for certain situations, like I find myself in now with this website (and other SEO related ones), difficult, but necessary decisions have to be made, and in this case, Thrive Leads had to be deactivated (for now).

So I hope this Thrive Leads review was helpful to you. If you have any questions on this plugin, let me know below.

Hi my name is Vitaliy and over the past 16 years, I’ve been making money online passively (Over $1 million earned) thanks to a program called Wealthy Affiliate.