There are many different things you can promote in affiliate marketing and ultimately, what determines if that promotion is a pyramid scheme is the promotion itself.

Throughout my years in the affiliate marketing world, I am proud to say I never promoted a pyramid scheme “opportunity”, but I have stumbled across many that were, are and continue to pop up.

What I want to do in this post is explain how to tell if the affiliate marketing opportunity you’re considering promoting may be a pyramid scheme or not. And this is not a legal article, because I’m not a lawyer. But I am sharing my personal, experienced opinion on the matter, which is quite vast as you’ll see. 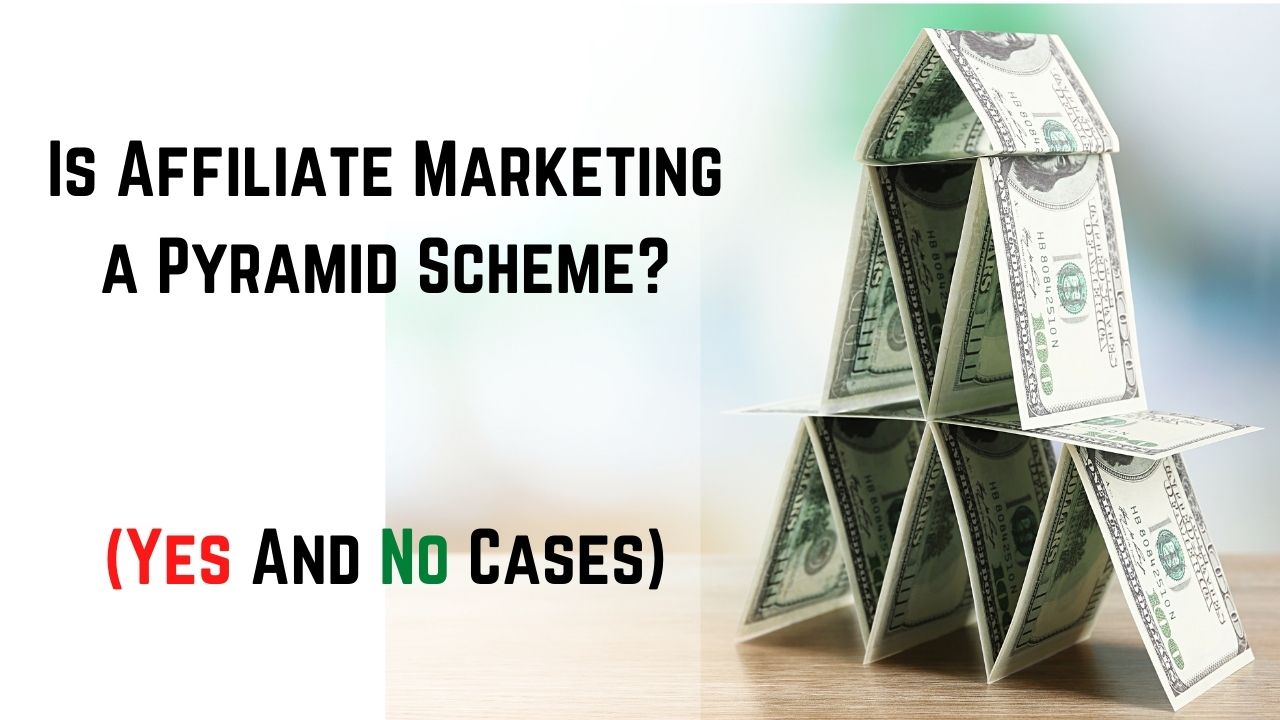 What is a pyramid scheme anyway?

The official wiki definition of a pyramid scheme is a bit simplistic, but I’ll explain it in my own understanding. In it’s most basic sense, it’s an almost exclusively self promotional opportunity in which you:

Now from this point, depending on what type of affiliate promotion you have, you may have different a pyramid scheme be present, but be shown in different ways. For instance:

If it’s an multi level marketing affiliate opportunity, the people you referred into the opportunity now have to promote it to others, and you will make residual commissions from their referrals. This is known as a two or more layer downline.

If it’s a basic affiliate promotion (not MLM), then it’s literally just you promoting the same program to others, and they promote the same thing to others, but you don’t make money off those referrals. In most cases, the programs I’ve found that engage in this are high ticket affiliate marketing programs.

If it’s something in between (grey area pyramid schemes), this is where you will want to be careful. There are opportunities that have both an expensive product (like Kangen water systems) and program where you can promote both, but these programs require you buy the expensive product first, and then promote the program (opportunity) to others. This MAY be a pyramid scheme because the opportunity offers little if any value and the true money is made from buying the product (which may or may not be legit).

Whatever the case, the most common characteristic here is that the opportunity is almost if not entirely self promotional. You basically don’t have any other way to make money from the promotion other than to promote it, period.

Now does this mean that every affiliate marketing opportunity that has a self promotional option is a pyramid scheme?

No. There’s actually more that is required for that to be the case in my opinion and experience. And thus this brings us to the topic at hand:

When affiliate marketing opportunities may be a pyramid scheme:

Besides being self promotional, one thing you’ll always want to look for is this:

If the answer to ALL 4 questions is no, then it’s highly likely the affiliate opportunity you’re looking to promote is a pyramid scheme (though this is not always 100% certain, as there are exceptions).

Let me give you an example:

Let’s say you’re looking to promote something and an opportunity comes up: It’s a high ticket program, costs $5,000 to join and says if you promote it, you’ll get 50% commissions ($2,500 per sale). Sounds like an amazing offer right?

As you dig into it, you discover that there is literally no product involved. In other words, the $5,000 cost is for a program allowing you the opportunity to promote itself and nothing else.

There is no service other than affiliate payouts being given to you when you make the sale and there is certainly no training and/or no valuable training to justify paying $5,000 for training.

What do I mean by that? Well let me put it this way:

If I can find the same level of training for $20 on Udemy or for free on YouTube, then why would I want to pay $5,000 for this program? Just to promote it? Sorry, that sounds like a pyramid to me.

The unfortunate truth is that there’s many programs like this and some charge way more than the $5,000 example.

It’s basically an inflated cost put out there to get you to think the opportunity is amazing, but it’s really just hot air and typically in these affiliate opportunities, the first people (who know how to market), are those who make the most money from the scheme.

The other people who join eventually cannot make up the money they “invested” into this and in most cases, such programs crumble over time because they rack up complaints, accusations and more.

What’s worse is that any pyramid scheme accusations are met with counters that basically say “this is not an MLM, therefore it is not a pyramid scheme”. But this is a cop out excuse. Why?

Because remember, I gave you 2 examples of what a pyramid scheme can look like and only 1 of them is in regards to MLM programs, and in this case, the truth is that the affiliate opportunity doesn’t need to be an MLM to be a pyramid scheme.

The very fact that there is an exclusively self promotional model with no real product, service or justification for the cost of it is enough red flags to suspect it.

Another sad fact is that many unethical affiliate marketers out there will not care whether or not something they wish to promote is a pyramid scheme or not. They just care about the money.

And if ethics aren’t your thing, consider the fact that pyramid schemes are actually illegal to run. See the FTC site for details. I strongly recommend reading that article, but this particular statement rings louder than anything else: 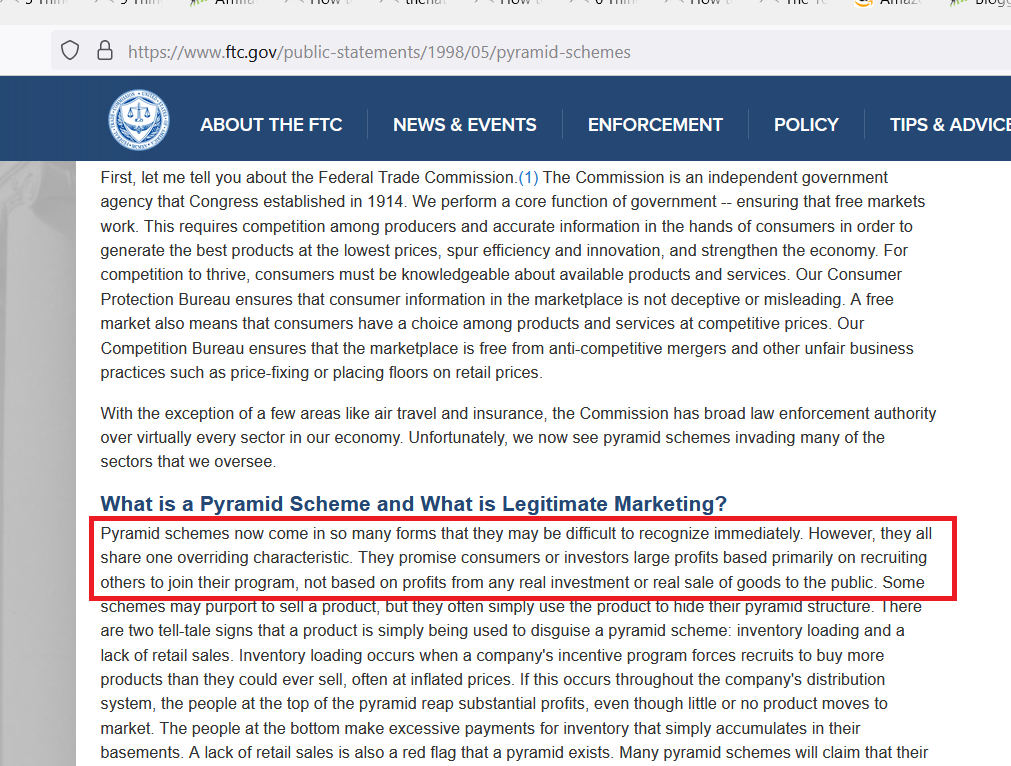 When affiliate opportunities are not pyramid schemes:

Basically anything opposite is what I just shared above applies here. But there’s a lot of different affiliate promotions you can engage with. Because of that, how do you tell if something is a safe promotion or a potential pyramid scheme?

Well for starters, if you’re an affiliate marketer promoting real products whose price matches their value, then you’re already on the green side in my opinion.

However, there are many affiliate opportunities out there in which you can exclusively promote a single thing, say for instance a:

In these cases, you are either in the grey area of pyramid schemes or safe if you ask me.

Now this leads to a perfect example to illustrate my point:

I promote a program called Wealthy Affiliate (among other unrelated promotions).

It pays me monthly for each member I refer who remains a monthly, paid member and I get paid very little for each person ($20+ a month). The cost of the program is $49-$99 a month.

However, certain people will accuse this program of being a pyramid scheme because myself and so many others promote it. Is that true?

No and here is why:

The program offers insanely great value for it’s membership costs. And if we run it through the test I shared with you above, you’ll quickly see why and this example shows how to critically analyze an affiliate promotion in determining if it’s a pyramid scheme. Here’s what I mean:

1) Is Wealthy Affiliate only self promotional? No, you can promote other products and promotions in and outside this place. In fact, like I said before, I’ve promoted different products (from Clickbank, Amazon, Avantlink and more) in different niches and still do.

I’ve made six figures doing that, and not a single penny of that came from promoting WA. In short, people have the freedom to choose whether to be a promoter of WA and/or something else and they have actual flexibility in that.

Certain pyramid scheme programs will preach that you don’t need to promote them, but when they cost $10,000, and pay you 50% per commissions ($5,000 a sale), are you seriously going to promote anything else that pays less?

Unlikely, so there is less flexibility there and in some cases, coercion to participate in the self promotion.

2) Is there an actual product? Yes there is:

You basically have tools and training given to you to help you build online businesses. Such tools cost their own prices outside WA which I can argue cost more on their own, vs inside the program. So you already get equal or more than enough value for your membership in these tools.

3) Is there an actual service? Oh yes there is:

Massive support, help and expert coaching is included (no extra cost) to Wealthy Affiliate members. The value of this, already on top of the actual product gives the program even more value to boot.

If WA cost people $1,000 a month to be a member of, I’d still say it was worth it, but it’s many times less than that, giving it even more value.

What is the difference between affiliate marketing and a pyramid scheme?

Again, it’s all in the actual promotion and as you saw with the above examples, that can really vary. And once again, run the product you are considering promoting through the 3 basic checks:

And keep in mind a few things:

Exercise your own judgement on this, but in the end, the best way to navigate this in my opinion is to analyze the price tag of the program you’re looking to promote and see if it’s value is actually that valuable.

If it isn’t, I’d look at another affiliate promotion.

6 thoughts on “Is Affiliate Marketing a Pyramid Scheme? Yes And No”

Hi my name is Vitaliy and over the past 16 years, I’ve been making money online passively (Over $500,000 earned) thanks to a program called Wealthy Affiliate.